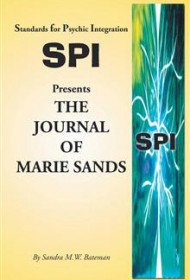 Consider the turducken, that holiday offering of a turkey stuffed with a duck, which is, in turn, stuffed with a chicken. Employing a similar concept, this story might be called a mystjournoir: It begins as a mystery, veers into the journal of the title, only to reveal itself finally as part novel and part memoir. While that’s a lot to swallow at one sitting, the individual components are entertaining.

Author Sandra Bateman opens the story in an airport with a fictional scenario: An agent following Marie Sands then diverts his attention to observe a wanted terrorist. When Marie is called into the local FBI office by NSA agent Ed Ricks, she learns she’s to become part of a project tied to national health care because of her psychic abilities. Her skill at comforting the dying may make her valuable in the world of hospice care.

Marie brings her journal to the rendezvous with Ricks to better explain her gift, and the director of Standards for Psychic Integration reads it (as do we) to assess her suitability to work with SPI, an organization that ranks psychics in terms of their fittingness for various jobs.

The larger story fails to resolve neatly in a passage that seems to hint at a sequel, then Bateman enters the story to point out that this novel has roots in real life.

SPI could be many things: It could be a solid thriller — but the text has numerous misspellings and the plot needs significant tightening to engage readers. It could also be an interesting look at the paranormal — but the journal entries would need expansion and editing. Alternatively, it could be a straightforward memoir about a woman whose work helps people close to death cross over more peacefully.

By trying to do all three things in one volume, the book suffers a rather fatal identity crisis. This is a very ambitious book, but it needs greater focus to succeed.