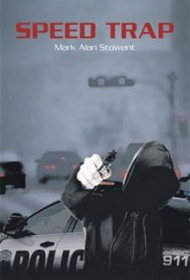 Speed Trap is a novel based on the author’s experiences as a police officer in a large U.S. city. It is billed as a series of “war stories” from the front lines of police work. The unnamed protagonist, presumably a loosely fictionalized version of the author, tells readers he will skip over the “detail stuff about [his] growing up,” which creates both strengths and weaknesses for the book. On one hand, the author jumps right into the action with the protagonist’s experiences at the police academy in Houston, TX. On the other, though, there is no development for the main character. The reader never gets to know him, and thus, never sympathizes with him.

As the novel progresses, the main character relates stories about being on the police force. He moves quickly through his police life, throwing anecdotes out for good measure, until he arrives at a life-changing event: his removal from the force. The twists and turns after this point are difficult to believe. The book also has some distasteful aspects, such as references to ethnic and racial groups through slurs and repeated discussions of “illegals.”

As a whole, Speed Trap reads like a series of stories, rather than a novel and doesn’t have a cohesive feel to it. The prose is stilted, and as a result, the story is never fully engaging. While it may have succeeded as a meditation on the life of a police officer, the bizarre twists near the end suggest that it will have trouble finding a niche. Those interested in police work, especially in the Houston, TX area, should consider picking up this book, but it likely will not appeal to casual readers.