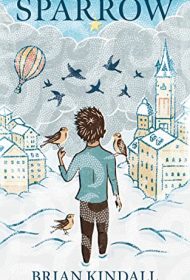 In this middle-grade novel, a lonely boy makes a wish that endangers his town.

Timothy Sperling misses his mother and father terribly. They have gone on a voyage to save a species of bird from extinction and haven’t been heard from in seven years. Tim has been left in the care of his gloomy, reclusive Uncle Morris Wellbeck, known as “Morris the Morose” to the citizens of Candela.

Morris stays holed up in his study at his formerly thriving factory. He ignores Tim, a bird-boned boy nicknamed Sparrow, except for assigning him pointless daily tasks. Tim’s only friends are the birds that come to his attic-room window. Then one night a shooting star appears in the sky above Tim’s freezing cold room, and Tim makes a wish. For his small city of Candela, which hadn’t seen snowfall in recent memory, he asks for snow—unleashing a flurry of unforeseen consequences.

Readers who delight in the flourishes and caprices of the English language will find much to enjoy here. A visit to the barber presents Tim with a humorous choice of haircuts, including the Fop, the Conquest, and the Looper. Kindall’s prose is crisp, yet also lyrical and lovely: “…the dream, the star, the wish had all been put down inside of him. There they lay now, like a nest of eggs in the darkness, waiting, waiting to be remembered.”

Admirably, Kindall refuses to talk down to his readers, skillfully exploring complex issues, such as extinction caused by overconsumption. For instance, when a wealthy couple sets Morris up in business making feathered hats and gowns, no one considers that the supply of beautiful feathers from a bird called the ocular sparrow might run out. Yet run out it does, and Morris goes from being adored as Candela’s largest employer to its most despised citizen. Meanwhile, the rich man and woman who funded Morris quietly leave town, their reputations intact. Perceptive readers will appreciate the irony.

The novel contains material that might upset some young readers, including descriptions of a riot and of Tim trapped in a burning building. Parents and teachers should be aware of this and proceed accordingly.

Nonetheless, Sparrow is a beautifully written, wise, and gentle book—one that middle-grade readers will savor.