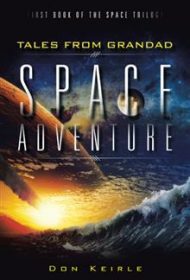 This futuristic science fiction novel—the first in a planned trilogy—recounts a dangerous conspiracy that threatens all life on Earth.

The novel is told through archived reports spanning many years. An interesting framework involves the aging archivist retiring midway through the book and his granddaughter, Catherine, taking over his job as space librarian. As the story develops, she and her grandfather become actively entangled in the plot, rather than merely chroniclers.

The story begins with the colonization of Mars, which leads to the development of new food crops, a medicinal wine, and a dangerous Martian flu. By the time Catherine takes over archiving, a new mission is planned: This time the Earth crew is headed for Europa onboard the Solar Orbiter, a vast ship comparable to a flying city.  With her new status as captain’s wife and space librarian, Catherine adopts a slightly more personal storytelling style than her grandfather. She chronicles rumors about an impending disaster that prompt captains and crews of two Earth spaceships to hunt an evil leader who is masterminding an attack on Earth and eventual takeover of Mars.

Heavy reliance on narrative storytelling and lengthy scientific explanations sometimes make for lackluster reading. Characterization is sketchy, with minimal attempts to individualize physical appearance, speaking style, or personality traits. Long passive-voice, jargon-filled sentences (sometimes run-on, incomplete, or containing copyediting errors) also make the story hard to follow. For example: “The frequency of the natural vibration was perceived to be inversely proportional to the distance to the target gravitational source and was directly proportional to the amount of gravitational pull and amplification in use …”

With thorough editing to fix errors and make the text more reader-friendly, this story could appeal to science fiction readers eager for a new adventure series. As is, the story largely falters under the weight of its flaws.