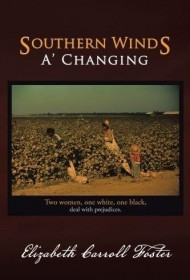 Beautifully written in descriptive, graceful prose, Elizabeth Carroll Foster’s Southern Winds A’ Changing follows Allise, a young, intellectually curious, outspoken Philadelphia Quaker from her arrival in Deer Point, Arkansas, in 1929 to her death in 1972, a convulsive span of Southern history.

She is immediately confounded by the many contradictions of the South. Initially charmed by surface Southern manners and the handsome, courtly Quent DeWitt, a wealthy landowner, she finds deeper puzzles as she gets closer to the place and the man, whom she soon marries.

This is a love story, but so much more. Allise graduated from Swarthmore and has come South to teach after reading about the serious need for educators there. Beyond her initial wondering why blacks are treated like animals or stupid children, she holds her basic belief that all people are good and tries to figure out what’s really going on to cause so much hurt. She’s told early on: “Everyone just accepts the way it is down here.”

The same day Allise gives birth to a son, Quent rapes a young black field hand in the cotton weighing shed on their farm. A son results from this violent union. The half brothers don’t get along — Allise’s son clings to the old bigotry, while the field hand’s son joins the civil rights movement — but their mothers become close. The stories of Quent’s children represent the old South and how it began to change.

Allise charges into situations with bold questions, gentle logic and stunning bravery. The only flaw is that she may seem too good, too perfect from our historical vantage. But the narrative, written in perfect dialect by Foster, an Arkansas native and journalist, should be enticing to anyone wanting to understand the incongruities of the American South.