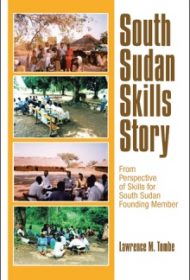 This thorough, academic review describes the 20-year program a group of far-sighted leaders developed to help some of the poorest people in the world, those in southern Sudan, acquire workforce skills to govern themselves.

Sudan endured nearly constant civil war from 1955-2004 before the Christian majority in the south voted in 2011 to create the Republic of South Sudan. Lawrence M. Tombe is unflinching in describing his new country’s challenges. British colonial policies, failed African leadership, tribal conflicts, and traditional gender-based violence (among other causes) had contributed to a lack of education and skills.

Thankfully, in 1997, some wise Sudanese in Africa and London, assisted by British non-governmental organizations, predicted the post-war secession and thus created the Skills for South Sudan (SKILLS) initiative. The author was part of that small group, which recognized that once civil war ended, the uneducated populace would be unable to run their new country. In this account, he describes how the initiative identified needs and provided hands-on training to Sudanese people who could carry out the tasks of government at all levels.

Tombe provides rich historical and cultural context for the changes required, noting, for example, a long history of violence against women and the need to create local government institutions to respond to sexual crimes. While the author labels the initiative a success, the oil-rich country remains mired in civil war and extreme poverty.

Although delivering important information, this account is often dry and repetitive, and would have benefited from more anecdotes about the initiative’s work and founders. Additionally, readers lacking knowledge of the country may be frustrated by the narrative’s scattered nature regarding the county’s history. While the book is strengthened by 20 meaty appendices, none contains a timeline of major events to help readers put the pieces together.

Given its academic nature, the book will likely have a limited audience. It will be most interesting— and inarguably useful— to students of the region and of international development.