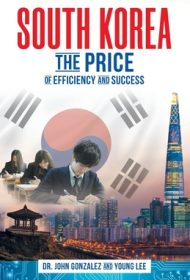 South Korea is a nice place to visit, but it can be a tough country to live in, according to this in-depth study of the East Asian economic powerhouse.

Written in Dr. John Gonzalez’s voice rather than that of his South Korean co-author Young Lee, the book takes an outsider’s perspective, appreciative but also critical, of its subject. Gonzalez praises South Korea’s spirit of hospitality (experienced during his five years there as an English teacher) and adaptability (evinced by the early adoption of mobile technology he witnessed on his first visit). However, he also finds problem areas: in particular, high inequality and weak safety regulations.

According to Gonzalez, the once-impoverished nation’s quick economic ramp-up, post-Korean War era, inculcated contradictory values into South Korean society. As such, it’s both consensus-based (when groups eat out, they often all order the same dishes) and fiercely competitive (college graduates must contend for a limited number of desirable jobs). The country boasts a strong ethos of self-sacrifice but also endemic corner-cutting, which has caused major accidents, the 2014 Sewol ferry disaster among them. With South Korea now among the “elite economies of the world,” Gonzalez wonders if the “time [has] come for Korea to deemphasize competitiveness” and reemphasize safety and economic equity.

The book is written with care and scholarly diligence, although readers may wish Gonzalez had delved more into his personal experiences in South Korea, as these provide some of the most memorable moments. For example, Gonzalez recalls how complete strangers would offer him food during his travels, a practice that “will remain engraved in my heart for as long as I live.”

Korean readers, in particular, may take issue with some of the author’s sweeping assertions, as when he notes that “values and levels of consciousness [have not moved] at the same pace as economic and technological progress.”

Still, those curious about South Korea but with limited knowledge of the country should find this thoughtful survey worthwhile.

Also available as in ebook and audio book.