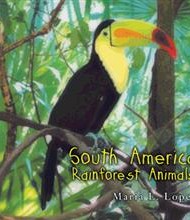 The book begins with a friendly first-person welcome by Marcus the Scarlet Macaw, who promises to “take you for a walk around the South American rainforest to meet some of my friends.” After this first page, however, Marcus never reappears to explain his animal friends to readers, and the personable approach shifts into omniscient narration.

Brief explanations accompany each color photograph, describing eating habits, behaviors, sounds, and appearances of nearly two-dozen species, from the tiniest leafcutter ants on branches to huge sloths hanging upside down from trees. A short glossary of six words follows the text, although the list easily could be expanded to include additional animal names and words that may be unfamiliar to young children.

The animal descriptions include fun details, such as the basilisk’s ability to run on water and the woodpecker’s tapping technique to compensate for not having a voice box. The text provides lots of good information, despite occasional spelling errors, missing words, and a repetitive writing style: “That’s a fox”; “That’s a caiman”; “That’s a rhea”; “That’s a crested oropendola”; “That’s a woodpecker”…

Picture books need strong images, and in this case the photographs should be close-ups with tight cropping and a sharp focus to show readers the physical features of each animal. The basilisk photograph meets all three criteria and provides an especially dramatic depiction. However, other photographs are slightly out of focus (most notably the caiman, leafcutter ants, umbrella bird, macaws, and xenops), obscuring subtle details.

Though South America Rainforest Animals has some editorial and pictorial weaknesses, the book could serve, nonetheless, as an informative introduction to endangered animals for young readers.