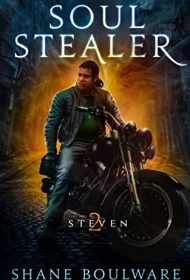 In the second installment of the action-packed Soulstealer series, readers again rendezvous with the titular villain, a malevolent spirit who can possess the body of a human host and eat mortal souls. This time, readers find new characters, viewpoints and details on the foundational story.

The Soulstealer is such a threat that the Catholic Church declared it a “Living Satan” during the Inquisition era. Orders dedicated to its defeat arose more than 1,000 years ago to ensure the Soulstealer never realized its ultimate goal: to ensnare millions of human souls and ultimately wipe out humanity.

As this story begins, the Soulstealer has been quiet. Steven Carpenter is one of two remaining members of the American chapter of the Ordo Solis, a once-mighty ancient order created to keep the Soulstealer in check. Although doubtful the evil spirit still exists, Steven and his partner watch for signs of its return.

Just as they’re about to abandon their tasks, dangerous signs of the Soulstealer indeed appear. Steven—described by his partner as “a nerd Trekkie biker —is suddenly forced to travel the world, pair with unlikely allies and face unexpected hurdles as he works to convince high-ranking politicians and world leaders that the Soulstealer has indeed returned to wreak havoc.

This book is a complementary narrative to the first: Steven’s exploits take place concurrently with the debut’s events. This means readers new to the series won’t be lost. It also allows the author to expand his narrative vision, adding dimension to his universe of unlikely heroes, epic villains and high stakes.

The author largely makes this nontraditional sequel structure work, thanks to successful action scenes, well-realized characters and a consistently compelling villain. Some grammatical errors and odd vocabulary choices distract, and the narrative can feel choppy due to short, episodic chapters. But these are minor problems.

Overall, the author manages a rare feat: making a fantasy sequel just as compelling, welcoming and accessible as its predecessor.