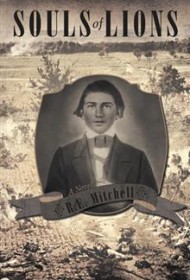 The absence of glory in war is a prominent thread in R.E. Mitchell’s sensitive, highly compelling novel about five young men fighting for the South during the Civil War.

The story begins in late 1864, months before the war’s end.  Brothers George and Walsh and three friends, all members of the Confederate regiment Fiftieth North Carolina, are human fodder for the war machine as they slog through swamps, fight their way through forest undergrowth, ford swollen streams and spend nights camped in freezing drizzle. They are always exhausted and hungry, yet they are constantly ordered to move. “They had been marched into a morass for no apparent reason,” George notes.  “He supposed they were being marched out for no better reason.”

Mitchell’s characters speak of war’s futility and curse the warmongers who never actually go to war while also adding their contempt for various officers. Constant rumors of Sherman’s brutality and nearness further weight their fears.

George emerges as a type of Everyman soldier as he questions tactical errors that result in great human loss: “Men died for no reason. If a man has to die, it ought to be something worth dying for.” Later he grieves, “Men had died over a few flooded rifle pits” and finally realizes that early teachings about the value of human life meant nothing because in war “human life don’t mean spit.”

Mitchell, a Civil War scholar, brilliantly evokes the miserable physical environment of war, but he is equally adept at depicting the banter, complaints, dark humor and moments of common decency, loyalty and bravery among the men.

The novel moves quickly, carried not only by rumors of the war’s end and the personal growth of George and Walsh, but also by George’s quest to reunite with a young woman he once saved from Yankee brutality. In all, the story delivers a truly moving read and serves as a fitting remembrance for this year’s sesquicentennial marking the end of the Civil War.

Highly recommended for fans of Stephen Crane’s classic, The Red Badge of Courage.