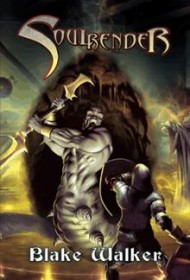 Tonally reminiscent of classic adventure fantasy from giants like Leiber and Moorcock, the pacing in Soulrender is relentless and the action literally nonstop. Set in a generic magical realm called Rynn, a place inhabited by elves, dwarves, goblins, etc., the story could easily risk falling into familiar genre stereotypes and clichés, but Blake Walker, for the most part, maneuvers around these potential pitfalls and creates a memorable world with an intriguing premise.

The story revolves around four characters: disgraced templar Erik and his twin sister Sellene; budding warrioress Katrina, and an elf who calls himself Telweir. All have recently learned that they are soulrenders: exceedingly rare individuals of unimaginable power who, when using their supernatural abilities, literally rend pieces of their soul in the process. The more of their souls that they lose, the less human they become – until, legend has it, they transform into soulless monsters.

After experiencing comparable banishments and tragedies, the four eventually meet on their way to a place known as the “bone tower,” where rumor has it soulrenders can possibly “fix” their problem. But they get sidetracked when they run across a despicable thug who is kidnapping young girls for some horrifying arcane ritual.

On the surface, this may seem like another pedestrian fantasy replete with prophecies, epic quests, and heroes fulfilling their vaunted destinies, but Walker’s storytelling skills – namely fantastic character development, a plethora of downright cool monstrosities, and, most of all, a fluid, confident, and lyrical narrative voice – make this a highly enjoyable read.

And the events of Soulrender are essentially just the foundation for the much larger story arc: the first chapter of the second volume in the Soulrender saga, Soulshred, is included as a teaser at novel’s end.