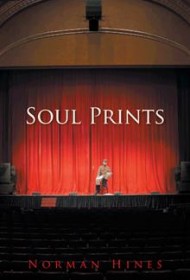 In complicated, mystical Soul Prints, a lost soul seeks out a high school girl who is about to die so that their spirits can join together and stop evil forces.

Nathaniel, a troubled soul in a teen’s body, finds himself drawn to Nuri, a forlorn girl struggling with rejection. Her abusive father has been jailed for petty crimes and wants nothing to do with her. Little does Nuri know that she is destined to forgive her father. Nathaniel’s arrival in her life marks the beginning of her spiritual rebirth.

According to Nuri’s “soul print,” or preset life story, she will play the role of Don Quixote’s mistress, Aldonza, in a school musical, which will cleanse her soul. As Nuri practices the part, she expels her anger toward her father and Aldonza’s soul, which had inhabited her body.

Then Nuri is fatally hit by a car. Her purified soul joins Nathaniel, whose soul has returned to his body after his own death, and they seek out the Maker of Dreams, Jude, who is trying to stop an “archfiend” and the Supreme She-Devil of Darkness from unleashing nuclear weapons on the world.

Jude is making a “window of redemption” that he believes will radiate enough goodness to defeat them. He’s waiting to add Nuri’s and Nathaniel’s souls to others he’s embedded in the stained glass, but before he can, Jude is murdered and a glass panel is smashed. Will the forces of evil win?

Norman Hines’ complex novel uses interesting symbols, including a red dress that represents the blood of pure souls, but, as is evident by this plot description, the story is convoluted and extremely difficult to follow. Sentences are overwritten, and abstract terms about spiritual transformation are not explained. If the story were more simply told, it could be a thoughtful read for teens interested in predestination and salvation. As it stands, it’s not likely to attract the audience it seeks.