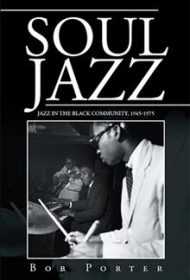 Soul Jazz is a marvel of a book, written by an author who lives and breathes the topic.

Bob Porter is a writer and record producer who has recorded some of the greatest jazz and blues artists of our time, including Hank Crawford, Jimmy McGriff, Gene Ammons and Funk, Inc., and also helped reissue some of the best collections of jazz and rhythm and blues. A two-time Grammy winner, he was inducted into the Blues Hall of Fame in 2009.

The author brings his deep knowledge and love for music to this well thought-out, chronologically organized narrative of the careers of black musicians, beginning with the “Race Music” of post-war jazz and blues to the rise of rock and roll from R&B. He effortlessly weaves discussions about artists and styles with information on social and technological changes (e.g., discussing the evolution of albums and the importance of radio). And he follows musicians like Count Basie through various musical epochs. The book also shares the stories of dozens of artists you may or may not know, explaining where they fit into the tapestry.

One of the book’s highlights is Porter’s personal reminiscences about other musicians, labels and producers.  In one of the most personal passages, he recounts meeting guitarist Grant Green for lunch in 1969 to recruit him for the Prestige label. While that deal didn’t work out, Porter hired him as a sideman on some recording sessions and became a lifelong friend of Green’s.

Porter explains that he wanted to tell this narrative, because most jazz critics write from a white-centric, intellectual perspective, rather than focusing on the nightclubs and stages of Harlem where the music incubated. While Porter is himself white, the author’s knowledge of and empathy for the experiences of black musicians before, during and after the Civil Rights era shines through on every page.

For any music fan – or anyone interested in social justice and American culture – this is a must-read.