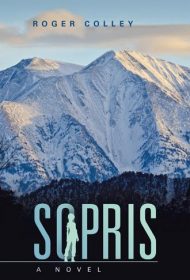 In this latest episode in a series examining climate change and global terrorism, Roger Colley revisits engineer Michael Reynolds, a man known for his Jack Ryan-esque deeds. Here, however, the action focuses on the internal conflict of the Taliban assassin who barely escaped in the last book.

Thrillers often employ the trappings of international intrigue to examine bigger ideas, such as the morality of murder or the Machiavellian motivations of villains. In this story, Colley maintains his characters’ charisma but purposefully abandons genre tropes to explore the inner life of his troubled antihero.

Michael and his wife Rose saved the day, and the world’s environment, in A Truthful Myth before fighting a terrorist attack and viral pandemic in In Three Days. But Fila, the aforementioned assassin, couldn’t pull the trigger on Rose and her newborn son. Now she’s on the run.

We follow Fila through the Colorado wilderness as she seeks shelter. She’s exhausted and unsteady after suffering a crisis of faith and lucky to stumble across the mountain home of a compassionate family, whose son Zachary finds in her a spiritual counterpart.

The book reprises Michael, who is helping a friend run for president and is also determined to clear Fila’s name. But while previous books are bombastic with atomic bombs and assassination attempts, Sopris propels the story more quietly. Most of the book centers on Fila’s debates with Zachary, as they grapple tangentially with religious history but primarily explore the fundamental disconnect between good and evil.

A circular narrative arc built upon conversations between Michael and his son attempts to tie off loose ends, but leaves some threads hanging. And in a story where the world’s future is at stake, Colley ends with something of a whisper, not a bang. Stiff dialogue is jarring and greatly slows the narrative. Far-fetched character reversals can also be disorienting.

As such, the story’s appeal will likely be limited to those who can appreciate its philosophical exposition.