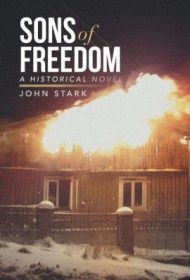 “A barbed wire fence surrounded the entire property and more barbed wire was strung around the dormitory buildings. The police guarded the perimeter. Inside the dormitories, small cots were lined up and filled with crying children.”

This chilling description seems straight out of today’s news from the U.S.-Mexico border but instead comes from John Stark’s intriguing historical novel, Sons of Freedom, depicting little-known events in Canada nearly a half century ago concerning the Doukhobors, a marginalized and hated immigrant religious sect from Russia, and its splinter faction, the Freedomites.

The story opens in 1970 during the real-life anti-war protest at Kent State University when the National Guard opens fire. Fictional American student Paul Easton flees to British Columbia to avoid being sent to Vietnam. There, he stumbles upon a beautiful young woman named Tanya who lives in a tent-city commune run by the patriarchal leader of the Freedomites. Paul is sympathetic to their cause and abhors the prejudice they endure from townspeople. A forbidden love blossoms between Paul and Tanya but is thwarted as the escalating struggles against assimilation by the Freedomites lead to violence, blurring lines of right and wrong.

Stark has woven a potentially fascinating story, propelled not just by unfolding political events but also by a love triangle between complicated characters. That said, though, the book feels thinly developed. It’s well plotted and moves briskly, but readers will crave to know much more about the three central characters and how they fit into the broader historical context.

Paul is a stranger in a strange land but little is known about what came before to instill his sense of outrage at injustice. Gregor, his romantic rival, is similarly underdeveloped as he seems torn between conflicting worlds. And, Tanya, a strong woman with a devastating secret, shows flashes of independence but then acquiesces to her parents’ demands; this carries an enormous emotional price that begs to be explored further.

Still, the story is worth reading, if only as a reminder that history can—and often does—repeat itself.