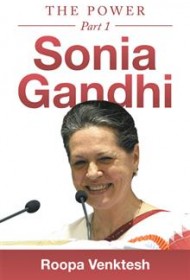 Sonia Gandhi is the widow of Rajiv Gandhi, former Prime Minister of India. After his assassination in 1991, she eventually was elected President of the Indian National Congress Party and has served in that capacity since 1998.

This book recounts such biographical details as Gandhi’s marrying Rajiv, despite her father’s wishes, her initially reluctant entry into politics and some early rough patches (she was asked to give up her seat as chair of the National Advisory Council) prior to her present success.

But the biographical sketch is spotty, and the text favors recounting the author’s fan-like thoughts and feelings about Gandhi, rather than portraying the woman’s life. For example, she writes: “I like to think that the fact that Sonia Gandhi has harnessed her potential as a political leader has perhaps made her one of the coolest politicians in India.” The author manages to meet Gandhi at one point, yet doesn’t record the interview or recount their discussion here.

The writing meanders and is repetitive, as in: “Largely Women [sic] in India are discriminated and being born in India I had witnessed how discrimination of many variables could affect people.” In the last third of the narrative, Venktesh often focuses on wearying descriptions of her library research and her conversations with others about Gandhi.

In her Introduction, Venktesh notes that this is the first in a series and implores readers to email her with any factual corrections, promising to incorporate them into later volumes. This approach diminishes the value of this book: Why not be thorough and comprehensive in volume one?

There’s nothing wrong with having a strong role model and sharing enthusiasm for them, but a biography makes different demands on an author. Sonia Gandhi: The Power, Part 1 requires sharper focus and weightier material to entice readers into returning for a second helping.