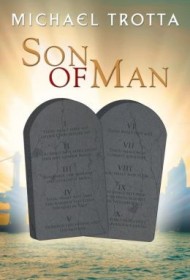 Son of Man combines elements of many genres, including thriller, science fiction, religion, and history.

The story opens in 2036 inside Golgotha, the government flash disintegration chamber where Joshua faces execution ¬— instantaneous atomic dissolution — alongside two thieves. Joshua tells this story: the cloned devil-child of Hitler and Stalin’s clones is about to take control of global finances and, hence, earth, unless Joshua, the cloned second-coming of Jesus stops it. Joshua and his friends Maggie, Rocky Peters, Johnny, Paul, et al, pursue Jud, the evil clones’ spawn, to the final confrontation on 42nd Street where, in order to save the world, Joshua allows himself to be captured and then executed, because “only my flash disintegration would destroy all traceable genetic pointers to my sole remaining anonymous offspring,” who have been cloned from two copies of his own DNA.

In other works, redemption through messiah sacrifice (Heinlein’s Stranger In A Strange Land), the second coming (Farmer’s Jesus on Mars and Sturgeon’s Godbody), and yes, resurrection (Simak’s Time And Time Again), engagingly carry off these intriguing, but difficult themes. In Son of Man, Michael Trotta makes an added case for genetic predestination, with a genetic roadmap in the Bible. “Our fates are somehow encoded into our chemistry, our genes…the Bible spells out a specific course of events.”

Ultimately, though, there are just too many elements in this hyper-complex story for Trotta to balance. His overly ambitious attempt to combine a devil-spawn thriller integrating genetics, cloning, history, religion, and a tri-partite surprise ending, drastically impedes the telling of the tale. The pace suffers from overlong information dumps on genetics (“chromosomal reconstitutions and recombinant compilation”) and biblical and pre-biblical history from Akhenaten to Ziusudra, until it becomes a jumble of abstruse data. Even his characters, including Joshua, tell him so: “Maggie recognized how confusing I was becoming.” In the end, it becomes a tedious read. Less would have been more.