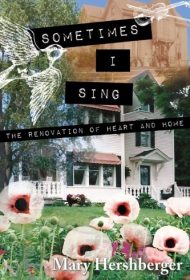 Sometimes I Sing is an ambitious memoir built around an ambitious project: the restoration of a historic house that two decades of neglect and incongruous “improvements” had rendered an eyesore, replete with a flooded basement, rotten siding and a leaky roof.

Enter Mary Hershberger, a divorced teacher in her 50s with 20 rehabbed properties under her belt, including two on the same Syracuse, N.Y., street as the eyesore. One “was a house, I said, where I would live until they carried me out in a box.”

Hershberger ponies up the full asking price – $92,000 – and commits to countless months of stripping, sanding, tiling and spackling. Along with the old paint and wallpaper, the author winds up stripping her soul as the story of saving the house morphs with that of her life, a story “almost too sad to write about.”

But write she does, about being raised Mennonite, which she likens to “being a goldfish still in the plastic Ziploc from the pet store placed in an aquarium surrounded by other fish”— “‘in’ this world but not ‘of’ it,”; about growing up with three mentally ill siblings, a bitterly angry mother and a weak, ineffectual father; and about the search for authenticity in one’s life as well as one’s dwelling, a need “to touch solid wood behind the paint and plaster.”

The result is as unconventional and idiosyncratic as the house that inspired it. Each room introduces a chapter; topics such as marriage and motherhood, feminism and sexuality, and sacrifice and survival are interwoven with the nuts and bolts of renovation, punctuated by before-and-after pictures.

The author seasons her powerful yet graceful prose and haunting poetry with scripture, news clippings and famous quotations. Gloria Steinem, Adolf Hitler, Virginia Woolf and John Donne are among those who appear.

This doesn’t make for light reading, but for nontraditionalists whose tastes run toward the existential, Sometimes I Sing is not to be missed.