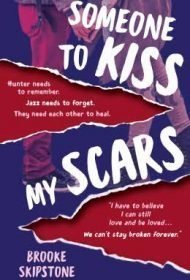 The content of Brooke Skipstone’s riveting new adult novel, Someone to Kiss My Scars, is both traumatic and graphic. Indeed, Skipstone warns readers of this in the book’s foreword: “This book contains scenes of sexual abuse, self-mutilation, and suicide. It should not be read by teens who wish to be shielded from such harsh realities their peers may be enduring alone.” Despite the deep pain the characters experience, however, this is a beautifully written book.

Set in the present day and containing paranormal elements, the novel centers on Hunter and Jazz. Hunter just moved to Alaska after his father basically had his traumatic memories wiped through a special therapy. Those memories included sexual abuse by his mother; self-mutilation; the death of his younger brother, and his father’s homosexual affair. His friend Jazz, too, has experienced suffering and tragedy that she’d like to forget. As the novel unfolds, the relationship between the two grows into something more.

Meanwhile, although his own traumatic memories are gone, Hunter has been experiencing visions of others’ memories. When he writes these visions down as stories, the memories—of sexual abuse, rape, mutilation and even fatal events—are erased from those living them. Eventually, Hunter realizes that these visions are helping him re-discover the life he lost.

Despite its paranormal elements, the novel is at heart a lovely and very real romance. Skipstone’s skilled storytelling easily draws readers in. For example: “Jazz sat up. ‘You never know when the mountain will reveal itself.  It can stay hidden for weeks, then boom, it’s in your face, filling up the sky.’ She turned toward him. ‘Kind of like the truth.’” The characters are compelling and their pain authentic.

While the ending is somewhat pat, the book is hard to put down. It will satisfy readers who have suffered abuse—and those who haven’t. After all, as Skipstone writes in her foreword, “People need to feel the pain of others.”