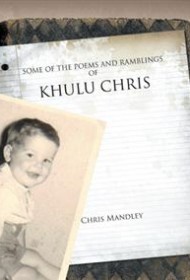 In the biography in the back of this book, we learn that author Chris Mandley was born in Buckinghamshire, England in 1955. By his own report, he’s led a somewhat picaresque life and has been a soldier, among other things, and married an African woman. These two elements–his experiences in the British army and his time spent in Zimbabwe–provide fodder for these poems and “ramblings.”

There are just 23 pieces in this 54-page book; the print is large and each poem is centered on the page. There are a few prose pieces, as well as photographs of African women in his life and political leaders. One of the short essays is titled “The Power Goes Off” and relates how blackouts in Zimbabwe are inconvenient but also make “everybody incredibly social.” The occasional inclusion of local color, such as “that’s probably why [the Zimbabweans] make light of [blackouts] and joke that ZESA (Zimbabwe Electricity Supply Authority) stands for Zimbabwe Electricity Sometimes Available!” lends this book some specificity and vitality.

Many of the poems express irony at the praise lavished on the military and outrage at the hypocrisy and greed of leaders, as in “Rememberance” [sic] which begins: “Head held high, chest puffed out in pride / I wear no medals!!! / No longer a uniformed flunkey…” and continues on to opine, “Governments never seem to [learn from their mistakes], their wheel just / keeps on turning.”

Overall, these poems are sincere, plainspoken, and straightforward, as in the poem “That’s Me!” which uses anaphora to emphasize the narrator’s steadfast nature: “I am the shoulder that you cry on, / I am the listener that never judges, / I am the clock that’s never late, / I am the confidante that never tells…”.