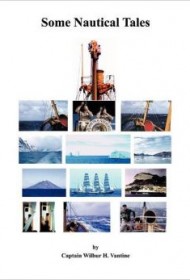 Some Nautical Tales shares stories of the numerous journeys the author undertook on a ship, first as U.S. military fighting in WWII and, later, in his civilian career. Although author Wilbur H. Vantine occasionally mentions family members, this memoir largely focuses on his career and associated adventures as he travels around the world.

To name just a few adventures: in Jamaica when bus employees were on strike, Vantine risked getting his eyes gouged out if he chose to ride the bus. (He walked!) In Holland, angry men mistook his crew as smugglers. In France, it seemed to him as though only prostitutes spoke English. In Israel, he climbed the YMCA tower to gaze upon the Holy Land. On one journey, he traveled from warm Argentina to iceberg-laden Greenland.

Although Vantine never provides graphic details, he does sheepishly admit to indiscretions (both his and those of his crews), including accepting an offer of penicillin in syringes to protect himself against sexually transmitted diseases. He nevertheless developed disturbing symptoms – which turned out to be an allergy to penicillin. Another time, the family dog enjoyed the champagne he sneaked home, and yet another time, he fired his girlfriend’s drunken father; his girlfriend never spoke to him again.

Overall, the book contains plenty of anecdotal gems and astute character sketches of people he meets, although they are often buried in long descriptions of routine details of ship life. Vantine has an amazing memory for specifics and provides interesting photographs to supplement his reminiscences. The tone is slightly stream of consciousness with glimpses of a wry sense of humor peeking through.

The level of detail contained here is appropriate for the author’s friends and family; as a record of daily ship life during the mid-20th century; and for people with similar experiences and/or significant interest in nautical topics. For other readers, less daily detail and more historical context would have been more appropriate and compelling.