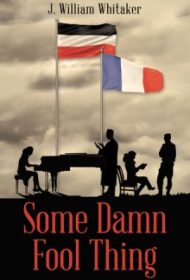 As war clouds formed before the outbreak of WWI in 1914, Europe was a tale of two eras, the friction between old and modern worlds roiling the new century. In Some Damn Fool Thing, J. William Whitaker shows how these crosscurrents vexed the lives of young Parisian friends.

At the story’s start, Sarah, Robert and Thomas are naïve idealists, haunting chic Paris Left Bank boîtes, enjoying the pre-war prosperity but faced with the gathering of powerful forces beyond their control: an emerging Germany seeking an enlarged colonial empire, French resistance to German domination of Europe and a net of recklessly entangling alliances that would ultimately draw nearly the entire continent into the global conflict.

The friends go in divergent directions, yet strive to adhere to their youthful ideals and friendships. Sarah, the passionate socialist, carries her pacifist fight against the approaching war to the Berlin bureau of a radical French newspaper. She remains close to her unlikely friend, conservative capitalist Robert, as his career as a French army officer blossoms but later strains his courtship with Marie, an aristocratic, talented pianist. Meanwhile, Robert’s cousin and priest Thomas finds his faith pitted against the new secularism.

As war clouds darken, each character faces challenges, betrayals and doubts. The book concludes with the triggering of the war—the title’s “damn fool thing” refers to a political assassination in the Balkans—leaving their war-time fates to future books.

While the narrative attempts to fully describe each character, the story is marred by dialogue that reads more like essays than actual conversations. Uninterrupted speeches run for paragraphs, appearing to be a device to educate readers about the period, rather than to advance a deeper understanding of the characters, whose voices too often sound nearly identical. As a result, conversations are stilted and the pace often drags.

While the novel presents a promising premise, careful editing and more realistic dialogue would greatly help to engage readers in an era rich in drama.