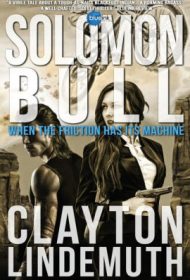 With Solomon Bull, noir novelist Clayton Lindemuth offers a virile tale about a tough-as-nails Blackfoot Indian testing himself against the world.

When we first meet narrator and title character Solomon Bull, he’s training for a brutal ultramarathon in Arizona called Desert Dog, organized by former green beret Cal Barrett. Solomon is a strange cat who trades stocks online to make ends meet and is generally a roaming badass, like Billy Jack, the rest of the time.

Solomon has also taken interest in an upcoming Senatorial election between sitting Senator Cyman and his opponent Duane Hock. After betting his roommate Keith that he can take ten points off Cyman’s popularity within three weeks, Solomon and his friends make Banksy-style graffiti raids to ridicule both candidates and disrupt the election.

Then, days before the race, Solomon is approached—naked in his shower, no less—by Rachel Brenner, an agent with the Treasury’s Office of Terrorism and Financial Intelligence. She’s convinced race organizer Barrett is funneling funds to terrorists and demands that Solomon infiltrate his organization. Soon after, a prostitute brings Solomon evidence that Senator Cyman is a child molester. Eventually, readers learn that neither Rachel nor the prostitute is what she seems—and much more.

While the story is somewhat overly dependent on its pedophilia angle to justify Solomon’s actions, it is largely a well-crafted, solid thriller with tense fight scenes and Tarantino-esque banter. Readers will likely differ on their reactions to the startling cliffhanger conclusion.

Lindemuth may lose some readers, however, with the book’s encroaching philosophy. Bull’s rugged individualism sometimes wears thin. His macho proclamations are straight out of Ayn Rand, and readers may have trouble siding with an absolutist who says things like: “Punishment is where the virtuous crushes the vanquished because it has good and truth and virtue on its side.”

Still, those comfortable with such philosophy will find a kindred spirit in Solomon Bull and an entertaining read in these pages.