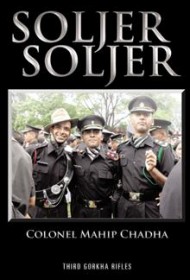 This novel tells the story of two generations of soldiers in the Indian Army, both serving in the same fictional battalion of the Third Gorkha Rifles. The story mainly focuses on the eldest, Surinder Singh Sahni, as he rises in the ranks and becomes a respected officer, but his son Jaskaran has a most unusual career, leading combat missions against terrorists. While Surinder’s tale is more concerned with the routine of military life, with training, inspections, and postings to different camps, Jaskaran’s is much more dramatic, involving pitched night assaults, amnesia, and unintentional bigamy. In fact, readers may wonder whether the novel should have starred Jaskaran.

While the novel certainly provides a strong flavor for life in the Indian military, many English-speaking readers may find it difficult going. The characters frequently speak entire paragraphs in various Indian languages, some of which are rendered into English afterwards, but some of which remain without a translation. The military jargon can also be difficult to decipher, especially when describing Pakistanis, variously referred to as “POK,” “Pakis,” and other names. In addition, an editor would have caught the numerous misspellings, punctuation errors, and overuse of exclamation marks and italics.

Still, the narrator’s voice is quite distinctive and full of humor, and the locations described in such exotic detail will both entertain and educate readers willing to give the novel a chance. While perhaps not the best introduction to the subject, Soljer Soljer makes a powerful case for the virtues of India and its military.