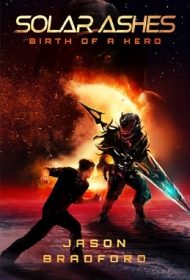 Jason Bradford’s science fiction tale revolves around an orphaned boy who discovers he has special powers.

Safe in the starship Odyssey when the sun went black on Earth, pilot Norman, his wife Melina, their son Conor, his dog Titan, and a small crew are the only survivors. Unable to return to Earth, they are now headed for the Vesputi galaxy, hoping to find a planet where they can live.

But soon alien monsters, the Kravii, attack the ship, and as Melina hides Conor and the dog in cryosleep pods, the vicious Kravii kill everyone, saving the cockpit for last. Norman and Merina know they’re doomed, but apparently the cryosleep pods can exist on their own, so Norman blows up the ship, giving Conor a chance for survival.

Fortunately for Conor, just as he’s about to be discovered by space pirates, he and Titan are saved by a Jopali task force of human-like beings led by the Supreme Commander Makon Welcos. Recognizing the boy’s potential, Makon adopts Conor as his son and enrolls him in an elite military school.

There, Conor and his fellow underclassmen are tormented by upperclass bullies. Although Conor looks like the Jopali, he gradually discovers that his origins give him special powers of speed, strength and resilience—an advantage against the bullies and space monsters he eventually must defeat. What follows is an episodic space romp replete with aliens as varied as those in the Mos Eisley bar.

Bradford has done an excellent job of world building, creating a planet enough like Earth to make sense, but advanced enough to represent a future time and place. He occasionally errs by accidentally using Earth terms like “the average wind speed of 140 mph” (the Jopali don’t use miles). Additionally, the battles are sometimes too detailed and feel redundant near story’s end.

But overall, this is an engaging story. The first in a series, the novel hints at romances that might develop in book two.