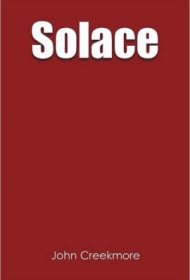 John Creekmore’s thought-provoking poetry collection, Solace, offers free-verse meditations on the human condition. As the speaker contemplates sources of suffering and opportunities for healing throughout this work, readers are urged to find peace “In the silence of that/ unscarred space.”

The speaker addresses broad but significant topics, signaled by titles like “Impermanence,” “Consolation,” “Faith,” “Hope,” and “Solace.”  One unifying message is the power of choice.  “An open hand.// A sword.//  But always a choice,” Creekmore writes early on, and later, “For there is always a choice,/ The shifting forms before you/ Being neither gods nor demons,/ Except you make them so.”

Admirably, the speaker presents a controlled tone, which consistently offers grounded and insightful expressions, such as: “what parent gloats in his/ Children’s pain” and “…we might plant our flags/ On a hundred summits.”  The author also demonstrates an impressive lexicon and attention to prosody throughout, which frequently results in sonically pleasing similes such as: “Time flows over the body/ Like a remorseless flood” and striking images like “forceps of judgment” and “a groove worn deep/ By disappointment.”

Sometimes, however, Creekmore forgets the power of luminous particulars and his language turns prose-like, telling rather than illustrating by example or image. For instance: “Know instead that no experience in/ This place is in the end anything more/ Than a ladder to something greater/ That has been hidden from us by our/ Closeness to the ground.”

Similarly, a passive, non-distinct voice sometimes impacts a poem’s ability to connect with readers, such as (in “Locust Day”): “It matters not how much blood/ And pain have attended the path/ Thus far…” Whose blood? What pain? Which path? Even small glimpses into an individual speaker’s life would amplify the emotional impact of Creekmore’s poems.

Overall, though, the poet shows much promise. Readers who appreciate contemporary lyric,  nature and philosophical verse will find beauty and meaning throughout much of this collection.