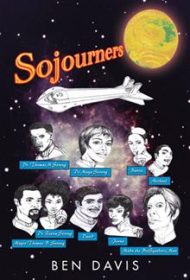 In this story, an extended family sets out to explore deep space with a reverse engineered starship created with technology (dubbed “jaunt” technology by the author) taken from alien invaders that humanity defeated in a war years earlier. Powered by their close family bonds and unwavering faith, the Strong clan rises to every challenge that meets them: serious injuries, a cosmic storm that almost destroys the ship, a nefarious political conspiracy to spark another war, even a seemingly immortal “space beast” that could wipe out humanity once and for all.

The pacing is relentless, the action nonstop. The author even weaves another subtle layer into the storyline by titling the majority of chapters after iconic song lyrics, titles, and musical acts.

Unfortunately, such considerable strengths are overshadowed by an abundance of  writing errors, including issues with tense, punctuation, and spelling. (Some of the spelling errors are unintentionally amusing, as in: “She wrapped her arm around her mother’s waste.”)

Inconsistency is also a problem. In the novel’s very first scene—where one of the story’s main characters, aerospace engineer Barrie Strong, is attempting to save the spaceship Sojourner from destruction—the ship’s biosynthetic artificial intelligence counts down how much time Barrie has to save the ship. On page five: “You now have seventeen minutes and thirteen seconds.” Then, just a few paragraphs later: “You now have nineteen minutes and thirteen seconds.”

Reading a novel filled with mistakes is a frustrating experience, but this particular experience is even more upsetting because the premise of the story is so solid and bursting with potential. With professional editing, this novel could easily garner wide appeal. As it stands, readers will struggle with the error-filled text.