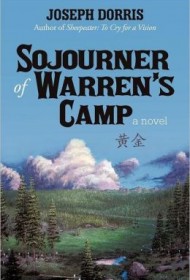 This historical novel traces the journey of Charles Chambers and his 14-year-old son Samuel in search of gold in the Idaho Territory in 1871. The engaging coming-of-age story is based on the author’s visit to the real-life Warren’s camp when he himself was a teenager. Joseph Dorris has done extensive research on his subject, offering rich insight into what miners endured for the chance to strike it “lucky rich.”

Charles Chambers is just back from the “Southern Uprising,” and his family has lost their Iowa farm. On a fellow soldier’s tip, he takes his son to search for O’Riley’s ledge, which is thought to have a rich vein of gold. But Samuel in particular is ill-prepared for the danger and hardships in the rough-and-tumble territory where falling off a horse can be deadly and innocent riders are often “dry gulched” (robbed) by roving bandits looking for supplies.

When they arrive at Washington, the town near Warren’s camp, they discover an odd lot of tents and wooden buildings: a brothel, assay office, courthouse, post office and jail. Charles finds work as a laborer, leaving Samuel to pursue their dream alone. Whether they strike it rich becomes irrelevant; it’s Samuel’s sensibilities towards this new way of life that drives the story. After meeting the local “ladies,” Samuel notes that, “he had not expected to come to a remote mining camp in the middle of Idaho Territory and find any civilization, let alone any women so beautiful.”

This is a well-written story of a boy becoming a man. Dorris has successfully combined an adventure tale with a vivid, real-life look at gold mining and survival in an inhospitable land. At book’s end, Charles and Samuel decide to tough it out through winter before preparing to return home. Dorris is planning a sequel to this charming story that should be required reading for adolescents ¬– and grown-ups – who want a realistic taste of the Old West.