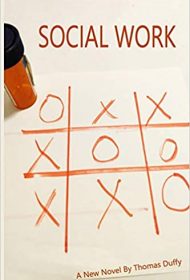 Thomas Duffy takes a thought-provoking look at mental health and the emotional relationships surrounding it in Social Work, a human drama that plays out between a patient and therapist amidst feelings of love and loss, success and failure.

A failed suicide attempt lands Marc Ziller, 28, in the behavioral health unit at a New York hospital. His treatment includes group and individual sessions with clinical social worker Lauren Davidson. Of the therapist/patient relationship, Lauren says: “I don’t believe it’s supposed to be everlasting. A good therapist points their patients in the right direction. Job done.” Yet the lines appear blurred with her constant thoughts and concerns about Marc, even after she’s left her position.

Throughout, Lauren wrestles with her desires for marriage and a family. While Lauren’s future husband, Ahmad, may offer stability, the couple’s conversations hint at a less than heartfelt commitment.

As the story evolves, Lauren and Marc each attempt to navigate paths toward self-fulfillment.

The narrative is driven by characters and conversation, whether through Marc and Lauren’s banter, Marc’s conversations at his job, or in his revolving attempts to secure a steady relationship via the likes of singles groups or online dating. Duffy weaves a touch of humor into this eclectic and engaging mix of character interaction; for example, with a singles group excursion to the Museum of Sex, therapeutic tic-tac-toe games that turn into Hangman matches, and Marc’s joking request of one therapist for her best 20-minute relationship advice.

Readers may find the ending disappointing, however. As the final chapters move ahead a few years, the nature of the central characters’ re-connect seems oddly contrived in light of the underlying emotions hinted at throughout the primary course of the narrative. Better proofreading is also needed to correct missing words and inverted phrasing.

Although there might be some predictability here in the patient/therapist relationship, for those who favor conversational-driven writing and ventures into the human plight, Social Work provides an interesting exploration.