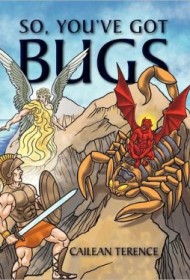 Using Christianity as the platform from which he makes many departures, author Cailean Terence offers his own surprising view of and remedy for the ailments that plague the human soul – such physical and mental states as arrogance, drunkenness, gluttony and more.

Terence claims these ailments, which he calls bugs, are a result of being infested with demons — a common problem. “There are many books written on how to exorcise demons,” he writes, “but the general acceptance is that it is something that happens to other people, when in fact it happens to everybody.”

So, You’ve Got Bugs is the result of the author having rid himself of his own bugs and wanting to pass on what he learned to others. The author focuses on bugs—what they are, how they spread, and how to evict them. Occasionally, he also formulates his own code of Christianity, noting, for example, that it’s up to individuals, rather than the church, to rid themselves of bugs; Christian churches, he writes, have no power to forgive sins, nor can they guarantee a place in heaven.

Terence lapses, occasionally, into crude language, such as calling promiscuity the “Bonking bug” and physical unattractiveness the “Ug bug.” He claims his ex-wife had the “Screaming bug.” Perhaps his intention is to be cute or funny, but such terminology generally comes across as crass. The author also characterizes cellulite as a bug and includes a graphic photo of the backside of an obese woman wearing a thong.

Terence quotes the Bible and Wikipedia to support his theories. His apparent disregard for science as an explanation for physical and mental disorders – even diabetes, which he hints is bug-oriented — strongly puts this book in the category of personal opinion. Those interested in demons or psychology may take some interest in this book, but most will view the author’s unorthodox and highly opinionated views of “ailments” with skepticism.