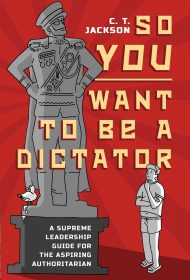 With the world currently experiencing a “shift toward authoritarianism,” the time is ripe for a self-help manual for would-be tyrants. That’s the premise of C.T. Jackson’s satirical attack on tyranny, which masquerades as a how-to guide for humorous effect.

Sometimes it lands successfully: “Educators are a consistent, easily targeted enemy for the aspiring dictator. After all, they teach children about democracy, critical thinking, and encourage them to have a voice and to vote, those sick bastards.” Other times it offers dated pop-culture references (including the Golden Girls in a list of famous death squads) or jokes that try too hard, only to fall flat (a list of autocrat role models that starts with Josef Stalin and Joe McCarthy, then devolves into irrelevant Joes, such as Joe Jonas and Joe Montana).

Jackson is on firmer ground when drawing on his research. Based on historical precedent, he explains to readers how they, as future rulers-for-life, would seize and keep power. He places more emphasis on electoral fraud and dirty tricks than on armed coups or revolutions, which seems a glaring omission considering the careers of strongmen like Franco and Mao.

On the other hand, the “advice” on staying in power— “keep your propaganda hard to fully pin down”; fill government with sycophants and unqualified relatives—humorously but accurately captures how 21st-century tyrants like Putin and Hungary’s Viktor Orban more incrementally subvert democracy.

Finding humor in the actions of history’s worst villains involves a difficult balancing act. If Jackson doesn’t always quite manage it, students of history and politics should still find some worthy insights, and bitter laughs, in his timely satire.