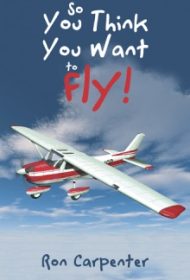 Sometimes, a chance encounter is all it takes to change your life. This was the case with Ron Carpenter, who found a new passion after one flight over his hometown of Glendale, Arizona with his buddy who owned his own plane, So You Think You Want to Fly! is his story of training and eventually becoming a bush pilot in Alaska.

While the title seems to imply a book for those interested in learning to fly, this is actually Carpenter’s own story. On his first flight with his friend, he finds everything a thrill, from the exhilaration of liftoff to the view from up in the air. The icing on the cake comes when he’s allowed to control the plane himself on the return flight.

Carpenter wastes no time finding a flight instructor. Before long, he and his wife own their own plane and are using it to take family vacations. The author learns to fly a float plane as well, and soon the family has relocated to Alaska so that Carpenter can ply his trade there, and, later, in Hawaii.

The author offers some interesting anecdotes. For example, finding grizzly bear tracks while working as a fishing tour pilot in Alaska served as a wake-up call about how close he was to nature, and once while flying in a storm, Carpenter’s plane ended up in a snowbank; thankfully, everyone was OK.

Those familiar with aviation should have little problem following along, but others may have to look up some terms, such as “ailerons.” Unfortunately, the narrative is riddled with typos, dropped words or letters, and a tendency to use abbreviations inappropriately (“All this was classified equip.”; “…every fifteen min.”). Additionally, female readers may chafe at Carpenter’s references to “the wife.”

The book needs scrupulous proofreading and further polish to shine. Still, it’s a largely fun read and a testament to the hard work that sometimes is required to follow your dreams.