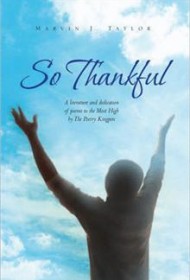 Marvin J. Taylor’s collection of poems, So Thankful, covers a range of subject matter, starting with his profound faith in God. Many cite scripture and several relate specifically to his commitment to God and a call for us all to “Chose [sic] the God in you.” The first half of the book describes Taylor’s intimate relationship with God, and also his struggles to live the life to which he aspires, as in “Each Day I Die”:

The devil had my mind, body, but not my soul…”
Can’t give up when I haven’t given my all

In addition to the spiritual aspect of the book, Taylor deals with other topics that reveal much about his life. The subject matter is divided into chapters such as: “Adversary”; “Oops, I Said It”; “Children Are a Blessing”; and “Black History Is NO Mystery.” In the section about his children, he has dedicated several poems to them, as well as included two poems they have penned. Taylor also devotes considerable attention to women and sex, many of them playful, bordering on salacious, with titles like “One Eyed Beast” and “Cheek 2 Cheek.” In the last section, he includes poems about, or dedicated to, family members who have passed.

Taylor’s expression of his heart, thoughts, faith and struggles is sincere, but not for discerning poetry readers, as his style is elementary and idiomatic. The poet would have benefitted from skilled editing, as there are numerous typos and misspellings, as well as interesting vocabulary choices. However, although his poems are chaotic, his personality is so forceful, one can imagine how compelling they would be as spoken word pieces.

That trait is evidenced in his introduction, as well, which commands readers to pay attention to this work he is proud to share: “Special request. To all fellow readers, please do me a favor and read the entire book. I really feel it’s a disservice to me and to yourself if you don’t.”