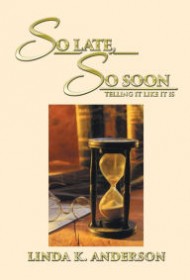 On the back cover of her book, septuagenarian Linda Anderson promises “straight talk” about being an old woman. She delivers some gems in this readable but uneven book, which may feed the longing many women have for wisdom from our elders.

Anderson, who has also penned several novels, writes the first third of the book largely as memoir, setting a friendly tone and establishing themes such as lessons learned, loss (of friends, mobility, looks), and reconciliation (of the wrinkles outside with the young woman still within). Thirty of her friends over 70 contribute the remaining chapters with essays that are intended to answer questions such as: “What is it like to be an older woman?” and  “What do you like and dislike about being older?”

Essays vary widely in quality and substance, although none of this educated, well-heeled group writes poorly. Each tells about her upbringing, and most describe a career, hobbies and children, as well as the writer’s circumstances now in old age. Unfortunately, some offer little meat on the subject of aging.

The weakest entries are mere recitations of experiences, with broad advice such as “keep learning” and “follow your passion.”  The best (along with the dozen poems interspersed throughout) mine honest, often-painful places, and employ creative imagery. Anne Doggett, for example, who buried her 24-year-old daughter, Lucia, writes, “I don’t linger on the sad notes though they have been manifold, but instead, polish the magical ones until they shine…[t]he trick is to transform enough bumps, pains, scars and loss into a stairway to the stars and in some way foster growth.”

Stricter adherence to the topic of aging and edits to expand on compelling subjects like sex (there’s a chapter on the subject, but it’s disappointingly cursory) and loss over a lifetime would help overall. Nonetheless, women seeking insight from elders about aging will find comfort in these pages, even if Auntie sometimes veers off topic, repeats herself, and dispenses obvious advice.