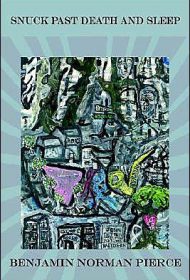 Snuck Past Death and Sleep is a highly detailed novel that follows four students through their first month at college in 1987, examining how their lives intertwine.

Lynn, a native of the town where Wasserman College is located, enrolls ten years after finishing high school to complete her music training. Craig has been taking classes at the school for ten years, having lost his purpose in life. Ed, an older, openly gay transfer student, rooms with Paul, a young semi-closeted freshman who declared his sexuality on his housing forms.

Together, these four join the philosophy club and a new, more activist gay and lesbian group. They shake up the campus by helping organize a debate on homosexuality and Christianity—an idea opposed by some campus groups. The narrative is punctuated by other dramatic events as well, such as Paul coming out to a neighbor after the neighbor confronts him about his roommate.

The author easily captures the deep, philosophical conversations—about music, literature, sexuality and other topics—common to college students. Sometimes, however, those conversations become so abstract as to lose readers.

Other issues also distract: While the novel’s highly poetic language can be appealing, it’s excessive at times (i.e., Craig is introduced as he “woke to the thousandth day in the dark dusk of his room, though he didn’t know it.”) Sections extensively detailing the lives of Lynn’s music teacher, a college administrator, and the administrator’s daughter, bloat an already lengthy story.

There’s also an act of violence toward the end that feels jarring in relation to the rest of the novel, and numerous misspellings (“it’s” for “its,” “saxe” for “sax,” and “gymn” for “gym”) and missing words make for a sometimes-challenging read.

As it stands, the book is overly ambitious and unwieldy, juggling too many characters and topics at once. With editing, it could appeal to those looking for a serious read, one that offers complex characters tackling issues in a thoughtful way.