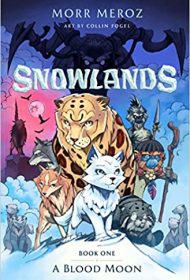 Feba is solidly white, a feature so rare that it sparks fear and superstition among the wolf pack. When the sheep disappear from the Snowlands, a hostile terrain the wolves share with other creatures, pack leaders blame the young orphan cub, seeing her white color as an evil omen.

Forced to flee, Feba faces the wilds of the dangerous Shadowlands. What follows is an action-packed, dynamic adventure that blends themes of identity and abandonment with well-crafted fantasy fare.

Feba encounters Usha, a snow leopard seeking to reunite with her lost son, and Batu, a wild cat who can only say “Batu.” The trio embark on an epic quest, meeting a charmingly varied cast of animal characters along the way (alligators, apes, vultures, rodents and others).

Meanwhile, Shein, a grown wolf and one of Feba’s only defenders in the pack, seeks to find and rescue the wayward cub. In the process, Shein begins to discover the cause of the Snowlands’ dwindling food supply and uncovers a dangerous plot against Feba’s life rooted in revenge, dark magic and other elements. Feba, Usha and Batu unearth their own clues about strange events in the Snowlands.

Meroz masterfully blends a surprising array of narrative elements, thanks in no small part to Collin Fogel’s stunning, fluid and evocative artwork. Text and imagery combine to summon a stunning world, one where a menagerie of three-dimensional animal characters drive the moving, exciting and believable story.

Meroz doesn’t pull any punches in telling a tale set solidly in a world ruled by animals and natural forces. While the violence included is typical of any nature documentary, some scenes may be disturbing for very young readers.

Nevertheless, the author and illustrator include enough tenderness, sensitivity and clarity to keep any young reader engaged. Older readers who enjoy a good story and jaw-dropping artwork will also appreciate this exciting tale.