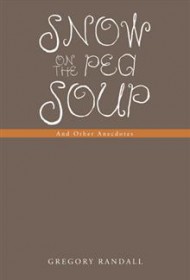 Odd, unusual and amusing things are bound to happen when one travels the globe during a lifetime of work. Englishman Gregory Randall, an investment manager, made it his habit to collect anecdotes of all types during his journeys and now shares them in this uneven book of light reading.

The nearly 200 anecdotes are wide ranging. Several cover small incidents from his student years in the early 1960s at Oxford University College, St. Edmund Hall. He mentions, for example, how his entrance interview required him to toss a rugby ball across a desk into a waste bin. Later he learned it was to determine his athletic ability, as the university wanted to be sure their campus population had a 50/50 balance between sports-directed students and others not so inclined.

Randall’s other anecdotes touch on odd banking rules in some countries, foibles in airline and train travel, the quirks of various islands around the world, and issues with having tea properly served in Bangkok, where one server apparently didn’t know that the English pour their milk into the cup before the tea, not after. Some more informative anecdotes concern worldwide wine technology.

Randall’s anecdotes, which he calls his “form of humour [sic],” rarely bring one to laugh out loud. Some are mildly amusing yet others are baffling, suggesting that what may have had impact when delivered orally simply falls flat when translated into print. The book lacks organization, randomly presenting incidents from various time frames and topics. (In fairness, he does call them ramblings.) It also is littered with distracting typos.

In sum, despite an occasional lift and spark from commentary on select incidents, this book requires a major rewrite to attract a wide audience.