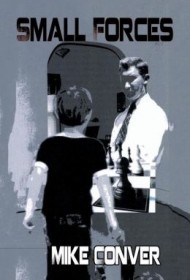 In Mike Conver’s dually plotted novel, good takes on evil – as well as the professionally inept – as a likeable, committed, junior high school teacher seeks to do the right thing, while beyond the school yard, sinister forces are at play.

The tale begins as a pair of drug dealers scout the junior high school, searching to build their cocaine clientele. Meanwhile, teacher Bob Scott reaches out to 12-year-old Tim Morton, a bright, young boy who is relegated to special ed classes because he reads poorly. When Scott works to mainstream the young man, the ill-tempered school principal thwarts him at every turn.

But Tim’s school problems turn out to be minor when his brother Andy’s friend finds himself ensnared in the cocaine dealers’ unconscionable efforts. When Andy attempts to help his friend get out of town, the plot takes off in the rush for survival.

The early chapters of the novel work mostly as setup for the rest of the story, and at times dialogue and description seem superfluous, existing only to impart information rather than move the plot (such as a page and a half description of the special education law). But once the action starts, the story becomes more engaging.

Conver’s novel could have benefited from a careful edit. Sometimes the author suddenly switches his reference to the character from “Bob” to “Scott,” jarring the reader. There are scenes that baffle, such as when Scott defies the principal but is later “bewildered” by the principal’s anger. In addition, some repetition should have been eliminated, such as similar descriptions of a fellow school teacher, Sally Webster, in different parts of the text.

While at times Small Forces can be a satisfying read, these weaknesses combined with flat, stereotypical characters and a certain predictability keep it from being fully engaging.