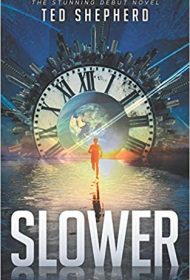 In his easy-to-read and engaging debut novel, Ted Shepherd explores the challenges faced by a young boy learning to wield his extraordinary power.

The story introduces us to Emit Friend, a high school student who seems most average. But Emit has a special talent that he learns about after a confrontation with a teacher: Emit can slow down time for the world around him. He becomes, in effect, invisible as he walks around the physical world while people and objects appear to freeze.

At first, Emit is unsure of how to use this power, but he soon discovers the dark side of slowing time. He uses it to win fights, for revenge, and to help the Giants win at football. Emit realizes the damage that can be done as his actions cause broken bones and ruined careers, but although he’s concerned about the effect of his power, it doesn’t stop him from continuing to wield it.

Emit learns that his grandfather is also a Slower, one with a very different idea of right and wrong. While the young boy knows that he, himself, has caused harm, it pales compared to the damage his grandfather has done. In a life and death decision, Emit must choose between family and his conscience.

This is a fun, young adult book that moves quickly. Although Emit often acts and thinks more like an adult (such as when he mentions his belief that his grandfather sees himself in Emit), it detracts nominally from the story. Overall, Shepherd spins an excellent tale, while skillfully showing how a teenager might react to such power: for example, using it to tease his sister and best his friend at sports. The characters and setting knit tightly together for a tense, surprising conclusion.

Shepherd has come up with a fresh concept and created a lively tale around it that readers will enjoy. Best of all, it seems he’s left plenty of opportunity for a sequel.