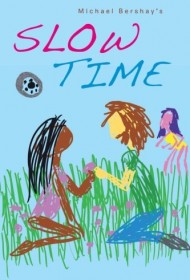 Michael Bershay creates an alien species with a fondness for underdogs in Slow Time, an epic sci-fi tale that spans millennia of human history.

Bershay’s aliens adopt humans who’ve been unfairly cast out by their peers. Using “slow time” (time travel based on Einstein’s theory of relativity), the aliens pick up these misfits from different eras in hopes of creating a permanent partnership with the human race. It’s an interesting concept, one that Bershay realizes with much success over the course of the book.

Bershay describes the fictional Baasians as intelligent extra-terrestrials who’ve been forced to become intergalactic refugees. After their own planet is destroyed, the Baasians visit Earth looking to collect plant samples to help build life on a new world. The lizard-like creatures don’t count on adopting humans, but that’s what they end up doing when they visit Earth about 500,000 years ago and find hominid Clover. They end up adopting others, including disgraced scientist and teacher Charlie Schwitters, whose friendship with Clover eventually plays an important role in the larger plot as the Baasians seek to return their refugees to a more enlightened era of human history.

Bershay paints the struggle in epic narrative strokes and does an impressive job of bringing the story into the context of contemporary geopolitics. At nearly 500 pages, however, some stretches of the story drag. Additionally, a steady stream of copyediting errors interrupt the story’s flow and obscure some of the plot’s more involved details.

For the most part, though, Bershay’s grand vision succeeds, thanks to his keen eye for detail and skill for dialogue. His effort is a compelling experiment for anyone interested in ancient human history or the more fantastical possibilities of the future.