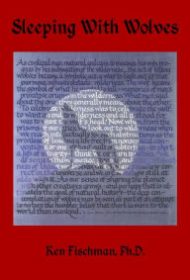 Ken Fischman, author of Sleeping with Wolves, definitely has a calling: to reintegrate the sensibilities of modern techno-besieged man with the ways of nature.  Whether he’s writing about instances where man has strayed from the path of balance (think trophy hunters), or where he has worked with nature (think the reintegration of wolves to Yellowstone), all of Fischman’s writings here work to demonstrate man’s “crucial connection” with the “natural world.”

Fischman, who lives in Idaho, holds a doctorate in genetics and has researched the “effects of environmental agents on DNA and chromosomes.”  He has also studied primitive skills with teachers like Tom Brown (author of The Tracker and the Way of the Scout) and, in turn, has taught his own wilderness survival classes.  His broad expertise is reflected in these essays and anecdotes, which range in theme from the dangers of genetically modified organisms, to the wolf’s natural place in the environment, to man’s latent ability to psychically interact with his surroundings (for example, Brown teaches his students to send an imaginary self ahead in the trail to scout out the landscape). Also included is one fictional story depicting a futuristic hunter’s comeuppance when he over-relies on technology and underestimates nature.  Although the story’s outcome is predictable, the pacing is taut and the plot compelling.

Some of Fischman’s essays offer fascinating constructs, such as his analysis of ancient side-by-side tracks of a wolf and a child in Chauvet Cave in southern France.  Others seem to be missing the legs of an argument, as when he quotes Joseph Campbell—“Just look in the daily paper”— to illustrate the consequences when children, who spend negligible time in nature, miss primary stages in their development.  The quote doesn’t reach the level of argument. The narrative also has a recurrent and distracting tense agreement problem.

Despite these flaws, Sleeping with Wolves is a positive and thoughtful book. It should prove a largely worthwhile read for wilderness and nature enthusiasts.