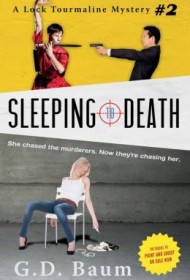 Sleeping To Death is the second in a series of hard-boiled crime fiction novels by G.D. Baum, featuring former-New-Jersey-cop-and-martial-arts-master-turned-freelance-bodyguard Lock Tourmaline. The compelling novel is a rush of spare writing — mostly dialogue — that skillfully delivers a complicated but believable storyline and a cast of intriguing characters.

Tourmaline has a black belt in Shaolin Kempo Karate and owns a school where he teaches; he’s also a master at Tai chi. The plot starts simply enough: Tourmaline is assigned by his client who runs a Korean drug ring to find out who killed her brother Jason in prison. Eventually, Tourmaline wonders if his client is playing him, and the story twists around as it bounces from one development to the next.

Tourmaline is a messy, conflicted protagonist. His career path began in law enforcement but now he works for criminals. His private life is a mess too. His girlfriend, and girlfriend-to-be are both connected through his client and her gang, and his girlfriend-to-be is married to his martial arts mentor, a man who is on his deathbed. Tourmaline’s ex-wife also gets pulled into the story with a subplot about a sex-tape she’s featured in. Baum manages to juggle it all without losing the momentum of the main narrative.

Baum’s writing is clean and breezy. He adds little expository text, offering just enough descriptions so readers can imagine the skeleton of a scene’s setting. Mostly, the story is told in dialogue that has the deliberate pacing of Hammett or Chandler in the beginning. As the story progresses, the dialogue becomes almost staccato in nature, like a verbal ping-pong match. The words scan as quickly as a rapid-fire, real-time conversation. Incredibly, the narrative picks up even more speed as it nears the climax.

In all, it’s such a fun read that if you haven’t read Point and Shoot, the first in the series, you’ll want to seek it out to get onboard at the beginning of this exhilarating ride.

BlueInk Heads-Up: Like his protagonist, author G.D. Baum is a black belt in Shaolin Kempo Karate and teaches Tai chi.