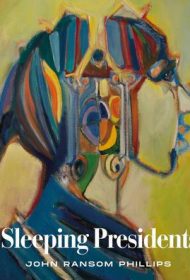 The literary landscape is full of books about the lives of the 45 past U.S. presidents. However, most are academic deconstructions of their politics, historical chronicles of their time at the White House, and biographies. John Ransom Phillips’s Sleeping Presidents changes all that by taking readers on a literary and visual tour of the dreams of those 45 presidents.

Walt Whitman’s poem “The Sleepers” inspired artist, poet, and filmmaker Phillips to “invade” and share the dreams of every Commander in Chief in the nation’s history. This is more than a mere imagining of the presidents’ dreams: “I embraced the mythologies of leaders who have shaped American history. I become those dreamers dreaming,” writes Phillips, echoing Whitman’s poem: “I dream in my dream/ All the dreams of the/ Other dreamers,// And I become the/ Other dreamers.”

The result is a vivid, lyrical, slightly bizarre, coffee-table sized collection of writings and colorful watercolor and oil paintings that bring the dreams of the country’s past leaders to life.

Perhaps the best thing about Sleeping Presidents is that it’s not overtly political. This is a book about internal monologues that illuminate a wide variety of inner rooms inside past presidents. Obama talks to an angel and feels alone. Grant carries a box in which he keeps memories that have “crystallized as letters.” Taft confesses he has never been “attracted to the rumble of American politics.” LBJ thinks about his hands and contemplates spit: “Humans are unique. Take our spit… Saliva reveals much about the spitter. Diet, stress, toxins, and lack of kisses are all registered clearly there for you to read. Just as a handshake is the measure of a man, so does his spit paint his portrait.”

Wildly imaginative, surprisingly tender, and packed with intriguing artwork, Sleeping Presidents is an objet d’art that serves as a conversation starter as well as an evocative exploration of the hidden worlds inside the minds of the nation’s past presidents.