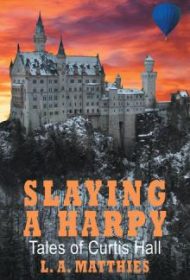 In the second book in L.A. Matthies’s young adult book series, a group of friends join forces with their new vampire companions to combat an evil Harpy bent on destroying the immortal bloodsuckers.

Besides studying standard academia at an elite school, students Tristen, Billy, Sasha, and other friends have their hands full as their lives have intertwined with a coven of vampires who have befriended them. The vampires have taken sanctuary at the school, going undercover as students and faculty. But a centuries-old feud between Harpies (monsters that are part-woman and part-bird) and vampires results in a Harpy trying to plot their demise, and the students join forces with the vampires. When the Harpy begins speaking through Sasha, it becomes clear that the students’ safety may also be at stake.

Matthies has assembled a fairly well-drawn main cast of six characters. But their stories are told in 26 chapters, with each chapter focusing on a single character, which makes for a confusing, jumpy narrative. Although the story’s main thrust is the ultimate annihilation of the Harpy, the journey is unduly circuitous. Among a host of subplots: Tristen’s romantic relationship with Marcella, a beautiful, blue-eyed vampire; Marcella’s adversarial relationship with her brother Pietro, who may or not be on the Harpy’s side, and a search for an elixir that would enable the coven to remain powerful during daylight hours. Add in the various locales, and the narrative can feel overcrowded at times.

Included are two pages of original, fun-to-study symbols that are intended to mark various points on campus. However, they aren’t shown on the map or incorporated enough into the story.

Slaying the Harpy is something of a mixed bag. Despite the sometimes-confusing narrative and need for streamlining, it has much that young adult readers will be drawn to: the blossoming romances; the gory, well-detailed scenes of blood-sucking; the many references to popular clothing brands, and teen dialogue and insecurities that are spot-on.