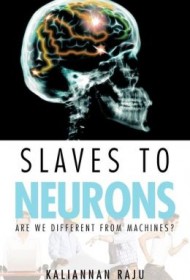 This science fiction novel – about a scientist who embarks on a mission to create a fully conscious humanoid robot capable of experiencing emotions – revisits themes Asimov explored almost 80 years ago in his Robot series.

Peter McRae is a robotics software programmer with a background in genetic engineering and neuroscience. He is obsessed with the belief that humans are essentially machines and that sometime in the very near future, robots will be able to think, feel, and be aware. To this end, he formulates a plan to place a synthetic brain inside the body of one of the most advanced robots in the world.

During this revelatory scientific endeavor, he and his assistant Brian – a hardware expert – discuss the meaning of consciousness, free will, the existence of God, and the shocking similarities between the human brain and a machine. (The comparisons between a virus in the human body and a computer virus are particularly interesting.)

But the story loses much of its momentum when the robot Rex inexplicably turns violent and threatens to kill Peter’s wife. The plot twist comes across as contrived, and the novel’s optimistic, visionary undertone changes instantly to one of a cheap SF thriller.

It would be remiss not to mention the many recurring grammatical mistakes in this book. The word “maybe,” for example, is misspelled dozens of times (“may be”). Clunky dialogue and ineffective pacing also contribute to a reader’s challenges in getting through the story.

The speculation in the last chapter – about how humankind may evolve in the future – is incredibly intriguing, but unfortunately, it doesn’t make up for a novel that delivers a flawed narrative focused more on concepts than actual strength of story.