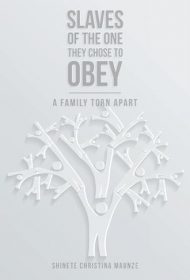 A native Zimbabwean, Shinete Christina Maunze is one of 13 siblings raised to believe in the power of Apostolic “prophets,” witch doctors, and diviners generally bent on seeking power and control for their own gain. Maunze converted to Catholicism as a young woman, in 1973. But her large family remained Christian in name only, and regularly consulted witch doctors, seeking to poison or kill rivals, cheating spouses, and ungrateful offspring. In fact, the author believes the event that began her family’s downfall was when seven village men, envious of her father’s success as a woodcarver, paid to have him poisoned.

Chapters focus primarily on individual family members who fell victim to manipulation or purchased the intervention of “folk healers.” These include Meg, a manipulative in-law who denied her own epileptic son anti-seizure medicine because his illness allowed him to “contact” spirits and the undead, and the author’s niece, Chanel, who died after a self-administered abortion after her mother refused her suitor and had his family cursed.

After decades of warning her family to follow a righteous path and being ignored, the author feels vindicated, citing a paraphrased quote from St. Paul [Romans 6:16]: “[W]hen you offer yourselves to someone as obedient slaves, you are slaves to the one you obey.”

This is a heavy-handed cautionary tale of blind faith as well as the author’s rationalization for her family’s discord. The story isn’t told chronologically, and Maunze’s rambling accounts make for an “I told you so” diatribe that can be wearying, confusing and often misleading. Adding to the reading challenges, her own religious agenda, punctuated by frequent sermonizing, routinely interrupts the narrative flow.

At its heart, however, the memoir is a revealing look at contemporary Zimbabwean culture. It may appeal to readers interested in Africa and the role of religion there.