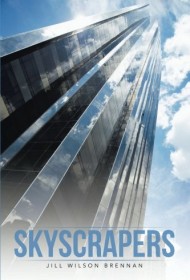 Skyscrapers by Jill Wilson Brennan is an intriguing novel starring Vernon Webb, a businessman with a past, and a series of events that threaten to ruin him.

Webb has hidden the criminal deeds of his youth away and has reinvented himself into the respectable CEO of a prestigious company. But when the CEO of a rival company, Eleanor Smith, and the mother of Webb’s long-lost son are both attacked, Webb begins to wonder if the two are connected and if someone is trying to drag his past deeds into the light.

An easy-to-read thriller, Skyscrapers features a main character that, while morally ambiguous, has tried to put his past behind him. Even if he’s not the most likeable of protagonists, readers will easily appreciate how far Webb has come and how he wants to do right by the people in his life. The shocking news he receives at the beginning of the novel also softens readers’ attitudes towards him. There are many characters in this book, and though they can be difficult to keep track of at times, they make for an interesting and diverse cast.

The plot of Skyscrapers is suspenseful and will keep readers guessing from page to page. However, the amount of the plot that is exposed in narrative, rather than dialogue, can sometimes make for a stilted read. More “showing” and less “telling” would have improved the book’s flow.

Still, Brennan is a talented writer, and she makes up for the narrative difficulties with interesting characters and plot. Fans of corporate thrillers should seek this novel out.