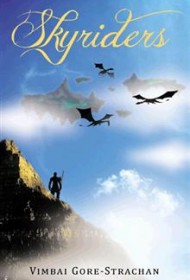 Although comparisons of Skyriders to Christopher Paolini’s Eragon are inevitable (Paolini self-published his novel about a farm boy and a dragon when he was a teenager), 16-year old Vimbai Gore-Strachan’s story featuring dragons is most similar to J.K. Rowling’s Harry Potter saga.

Skyriders, like Rowling’s Potter series, is a fantasy set in the present day. Uprooted from his home in England when his mother accepts a new job in Orlando, 15-year-old Kai Hunter’s entire world implodes when she dies in a car accident on her way home from work. Approached by his mother’s former teacher, Kai accepts the chance to study at the mysterious school.

The school is located on the floating isles of Keturah, a cluster of islands hanging high above the Atlantic Ocean, presumably in the Bermuda Triangle. To get there, Kai rides on the back of a Talite – a furry, winged, and undeniably cuddly domesticated creature. Once there, he soon becomes aware of an increasing threat to the society’s safety: the attacks from Dracaens, feral, dragon-like creatures that have already razed an entire city and killed thousands. As Kai struggles to find a solution, he realizes that his mother’s murky past is inexplicably part of the answer.

This novel opens brilliantly; Gore-Strachan creates an endearing hero and seamlessly immerses the reader in the fantasy world of Keturah. But the novel’s momentum slows from there. Instead of describing in detail the (potentially wondrous) attributes of the floating islands or deepening peripheral characters or even exploring the backstory, the narrative focuses on Kai’s flying lessons, which are not only boring but also largely unnecessary.

That said, the writing is crisp and fluid, the character of Kai is well developed, and the ending, although predictable, is satisfying. This is not a perfect novel by any means but one that will surely entertain fans of Harry Potteresque storylines — and one that should find traction with young adult readers.