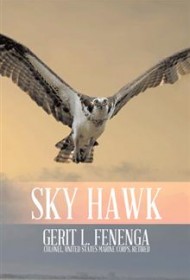 War stories often emphasize the heat of battle, or the culture shock faced by new recruits. In Sky Hawk, retired Marine colonel Gerit L. Fenenga recalls one tour of duty among several he spent in Vietnam, which fell midway through his service career. It’s rare to see such a polarizing war treated as business as usual, and this is one of the book’s strengths.

Fenenga signed up for the war in late 1966. His rank enabled him to pull strings and get the placement and duties he most wanted, which included lots of flight time. Much of Sky Hawk is about the day-to-day activities of life during wartime, and it’s fascinating to see how the military essentially builds a small city out of nothing.

A few problems arise when Fenenga’s retrograde views overtake the narrative; he can be blustery, and the writing suffers for it. Women are reduced to the role of prostitute or house mother here, which doesn’t reflect the many roles women filled in the war. And anti-war activists are caricatured as idiots. While he generally translates acronyms and jargon, occasionally the terms pile up without explanation and lay readers are left in the dark.

Despite these quibbles, Sky Hawk provides a look at war from an angle we don’t usually see, and Fenenga writes with humor and an eye for detail that puts readers in the pilot’s seat. (An example: “By the time I retrieved my helmet, Fox was nodding his head in the affirmative and rotating one finger in the air, the airman’s signal for start-up.”) Fenenga ends the book with a provocative suggestion: that bringing troops home from battle by sea, as used to be done, allows more time for them to adapt to civilian life and may help offset the jarring effects of PTSD.

Readers of Sky Hawk will find a new look at a widely documented war and a unique perspective on war in general.