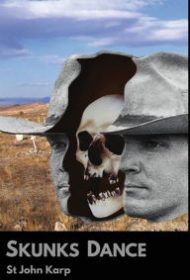 The story that kicks off the book is a Western tale taking place during the California Gold Rush, following crusty cowboy Spivey Spillane as he tracks down his nemesis in the town of Skunks Dance. Spillane believes Sam, a con man whose true identity is a mystery for much of the tale, framed him for a bank robbery.

The other story takes place in contemporary times, with a couple of teens, including Spillane’s descendent, unlocking the mystery about a treasure related to her ancestor’s quest.

It’s somewhat of an odd combination, switching from chapter to chapter between the disparate storylines, although author St John Karp infuses both with goofy characters, eccentric humor and manic energy. In both, the tone sometimes varies from lighthearted adventure to somewhat grittier violence. The technique is both a strength and weakness: While alternating between the stories keeps the book moving and adds both energy and occasional suspense, it might have been a less chaotic read had he focused more on one than the other.

Karp has a skillful touch with vibrant phrasing, bigger-than-life characters and colorful description, such as: “Dreadnought Hospital loomed against the sky like the last rotting tooth in a mouth full of gums.” And the dialogue is fun and often funny, as when a sheriff explains to his deputy how to do a proper hanging: “Some hangmen’ll tie it wrong an’ leave the poor sucker stranglin’ to death for twenty minutes or more. Sure, that’s got a certain kind o’ appeal to it, but there ain’t no sense o’ climax.” But substance generally takes a backseat to style, with characters coming off more as joke machines than actual people.

The book has a few typos and misspellings, but this is a minor distraction. Overall, Skunks Dance is a mixed bag, but fans of quirky adventure stories may well find it satisfying.